Water seepage in basement and crawl spaces usually occurs over long periods of time, and can be caused by numerous factors. Oftentimes, water damage may begin as early as the construction process but may be worsened by compounding issues.

The three measures developed to prevent this problem differ greatly in ideology and design. The three methods are:

Signs that water is seeping into a basement or crawlspace often take years to develop and may not be easily visible. Over time, multiple signs of damage will become evident and could lead to structural failure. 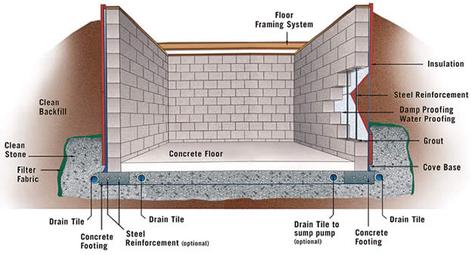 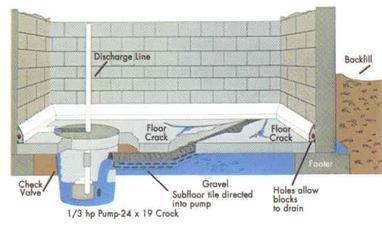 Shown above are illustrations of the idea behind waterproofing your home:

Interior basement waterproofing systems should be prepared to work in the case of a power outage, the failure of a sump pump, and in the face of overwhelming torrential rain. A proper sump pump, backup sump and/or battery backup sump pump should be installed in a large sump pit with an airtight lid for safety and to keep humidity from seeping through to the basement environment, where it can promote mold growth. This airtight practice will also reduce the possibility of dangerous radon gases for entering the living space.

Basement Waterproofing refers to techniques used to prevent water from entering the basement of a house or other building. Effective below ground waterproofing will include both drainage and sealers.